The Reality of Prescription Drug Spending in Medicaid

The Reality of Prescription Drug Spending in Medicaid
From our partners at PhRMA
By Robert Zirkelbach
April 9, 2015

Recent rhetoric on spending in state Medicaid programs often overstates the cost impact of prescription medicines and ignores the competitive biopharmaceutical market that exists in the U.S., which can generate significant savings for Medicaid programs.

Prescription medicines account for just 4-5 percent of total Medicaid spending and this share is projected to remain stable through the next decade, even as important advances, such as those made against hepatitis C continue. That’s because competition among brand-name medicines and aggressive tactics by insurers to negotiate prices all help to keep costs under control.

This is why we have seen state Medicaid programs negotiate steep discounts, on top of the statutorily mandated 23.1 percent rebate, that have further reduced the cost of hepatitis C treatment by 40-65 percent.

Discussions on spending on medicines in Medicaid programs need to include the following facts: 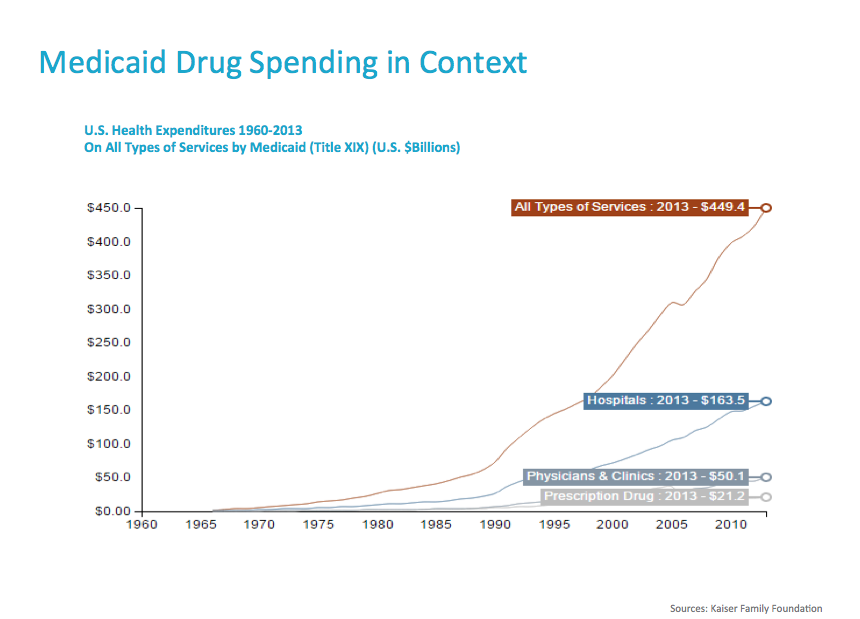 Despite claims that state spending for new hepatitis C medicines could exceed $55 billion dollars, the reality is that at current treatment rates, spending would represent less than one-half a percent of annual Medicaid costs in 2014. And some spending on the new generation of medicines is replacing prior spending on older drugs and health services previously used to treat hepatitis C and its effects. For example, in 2012 Medicaid spent approximately $443 million on the first generation of direct acting medicines for hepatitis C.

Discussions on spending on medicines too often focus solely on the list price and ignore publicly reported discounts. Jeff Myers, chief executive of Medicaid Health Plans of America, recently characterized the increased competition as positive noting that “market forces are beginning to take hold.” Leveraging increased competition in the hepatitis C market, state Medicaid programs are negotiating deep discounts with manufacturers, on top of statutorily mandated rebates, thatreduce the cost of treatment by 40%-65%.

The newest hepatitis C treatments have a cure rate of more than 90 percent against a disease that kills more patients than HIV/AIDS, is the leading cause of liver transplants and is the primary driver of the increase in liver cancer. Individuals with hepatitis C have a complex disease requiring advanced medical care. The cost of treating commercially insured patients with hepatitis C averages 5.5 times the cost of commercially insured patients overall. Hospitalization costs alone for hepatitis C patients with advanced liver disease increased 44% between 2004-5 and 2010-11 — averaging nearly $35 billion in the 2011. Without these treatments, annual medical costs to treat patients with hepatitis C have been projected to nearly triple, from $30 billion to $85 billion over the coming decades, because of increased hospitalizations and more patients suffering with advanced liver disease.

We need a robust innovation ecosystem that permits the ability to recoup investment not just for the few medicines that successfully make it to market, but also for the many others that don’t. The research and development process is challenging and characterized by many failures, for example:

+ Research in Alzheimer’s disease has resulted in 101 unsuccessful drug candidates and just 3 new drug approvals between 1998 and 2012.

+ In melanoma, there have been 7 new approvals since 1998, but 96 unsuccessful drug candidates.

+ In lung cancer, there have been 10 new approvals since 1998, but 167 unsuccessful drug candidates.

+  In brain cancer, there have been 3 new approvals since 1998, but 75 unsuccessful drug candidates.

We can’t afford not to succeed with new treatments in the fight against Alzheimer’s – the costs of not succeeding are unsustainable. The development of a new treatment that delays the onset of Alzheimer’s could reduce Medicare and Medicaid spending on patients with Alzheimer’s by more than $400 billion annually by 2050. If we do nothing to address this health need, by 2050 we will be spending $1.1 trillion annually on this condition alone — $176 billion of which will be direct Medicaid costs.